The Vet Tech's Role in the Treatment of Acute Canine Pancreatitis When a dog presents for an acute onset of vomiting, diarrhea, and abdominal pain, pancreatitis will likely be near the top of the differential diagnosis list.

The veterinarian will likely recommend a full diagnostic workup, including a CBC, serum biochemistry, abdominal radiographs, an in-house IDEXX SNAP® cPL and/or a Spec cPL to be submitted to a reference laboratory, and possibly an abdominal ultrasound. While there is no single test that can be used to definitively diagnose pancreatitis, supportive findings on multiple tests suggests a positive diagnosis. In this case, the dog will typically be treated for pancreatitis.

In most cases, we don’t know what caused the dog’s pancreatitis. The majority of canine pancreatitis cases are idiopathic. Some known predisposing factors do exist, however, including dietary indiscretion, obesity, hyperlipidemia, biliary disease, inflammatory bowel disease, and genetic predisposition (Miniature Schnauzers).(1)

How is pancreatitis treated?

There is no definitive treatment for acute pancreatitis. Therefore, treatment is focused on supportive care. Pets with pancreatitis are typically dehydrated, painful, and nauseated. Therefore, there are three components to effective treatment:

When should dogs with pancreatitis be fed?

In most cases, dogs begin voluntarily eating once nausea and vomiting are controlled. Small meals should be offered initially, then meals may be gradually increased to cover the dog’s entire metabolic requirement. A bland, low-fat diet is typically recommended during recovery from pancreatitis. This diet should be started while hospitalized and sent home with the owner at discharge.

In dogs that are reluctant to eat, a feeding tube may be considered.

Should antibiotics be given to dogs with pancreatitis?

You will likely hear differing opinions on the use of antibiotics in pancreatitis; some veterinarians use them, while others do not.

Pancreatitis is considered to be a sterile inflammatory process(1) and secondary bacterial infection is rare(2), so antibiotics are not considered a standard component of treatment. Some veterinarians worry about intestinal barrier compromise and bacterial translocation, however, and give antibiotics for this reason.

As you spend more time working as a vet tech, you will see that opinions on this issue (and many other aspects of vet med!) vary widely. 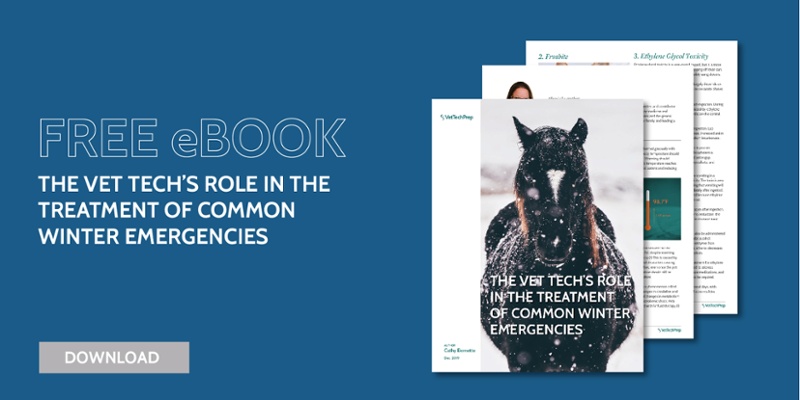